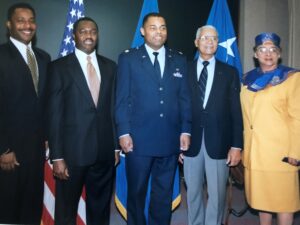 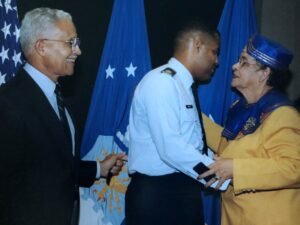 On 16 January 2022, at the age of 102, Air Force Brigadier General Charles E. McGee joined the Lonely Eagle Chapter of Tuskegee Airmen, Inc. An original Tuskegee Airmen, General McGee is credited with serving in three wars flying over 409 combat air missions earning him the distinction of having the highest number of combat hours for any Air Force pilot. His exceptional service to the United States earned him numerous accolades including: the Distinguished Flying Cross with two Oak Leaf Clusters, the Legion of Merit with one Oak Leaf Cluster, a Bronze Star, an Air Medal with 25 Oak Leaf Clusters, an Army Commendation Medal, a Presidential Unit Citation, a Korean Presidential Unit Citation, and a Hellenic Republic World War II Commemorative Medal. And in 2006, he along with other Tuskegee Airmen, received the Congressional Gold Medal.

As we reflect upon exceptional Americans, General McGee’s name and service to this great nation deserves honorable enlightenment for those not too familiar with his profound legacy serving in three major US wars, WWII, the Korean Conflict and Vietnam. His story begins in 1919 in Cleveland Ohio, his birth place. Traveling with his family, he eventually graduated from DuSable High School in South Chicago in 1938. He later enrolled in the Reserve Officers Training Corps at the University of Illinois. In April of 1942, he began aviation training at Tuskegee Air Field in Alabama, where he graduated with Class 43-F. In February 1944, his first duty was in Italy with the 302 Squadron, which was part of the 332 Fighter Group flying missions in Italy. Later, his segregated all “colored” unit began bomber escort earning high distinction for not losing a single bomber during their missions. During WWII, Gen McGee flew 136 combat missions. After WWII, General McGee became a maintenance officer at Smoky Hill AFB in Kansas. Subsequently, in 1950, when the Korean Conflict began, he was assigned to the Philippines. Returning back to flying status, he flew with the 67th Fighter Bomber Squadron. He was later assigned to Japan where he flew missions in North Korea; he is credited with over 100 combat missions in Korea. Following Korea, General McGee was stationed in various locations, to include Minot Air Force Base and Richards-Gebaur Air Force Base; he ultimately received an assignment to the Pentagon, where, in 1967, he was sent to Tan Son Nhut Air Base near Saigon, Vietnam to command a squadron. Gen McGee flew 173 reconnaissance missions in Vietnam. In 1968, Gen McGee became an air liaison officer in Germany and later chief of maintenance for a fighter wing. He later returned to the States and commanded Gebauer Air Force Base. In 1973, he retired from active duty with over 30 years of honorable service to the United States of America logging over 409 combat air missions. In 2020, then Colonel McGee was promoted to the rank of Brigadier General.

After retirement he led a business in corporate America and later ran an airport. He subsequently served as the President of the East Coast Chapter of Tuskegee Airmen, Inc., and later as the President of Tuskegee Airmen, Inc. On a personal note, it was during my Pentagon tour that I met Gen McGee, he stood in for my father and pinned me on as a Major, USAF. He subsequently appointed me as the National Resolutions Chair of Tuskegee Airmen, Inc. Gen McGee was a man of exceptional character, service, brilliance and dedication to the United States. His life was one of giving to others and making this world better for all people. Rest in Peace General McGee.